Due to increased volume and the impact of COVID-19, we are experiencing delays in processing and shipping.

Thank you for your patience as we fulfill orders as quickly and safely as possible. 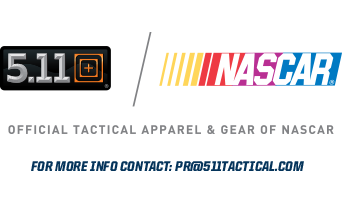 DAYTONA BEACH, FLA. (MARCH 5, 2015) — In its first year as the Official Tactical Apparel & Gear Supplier of NASCAR®, 5.11 Tactical® has not only produced high-performance officials’ uniforms for the sport’s three national series, but has also played a key role in driving business across the industry. Through its immediate and active participation in the NASCAR Fuel For Business (NFFB) Council™, 5.11 Tactical achieved more than $12 million in transactions, stemming from key marketing, promotional and supply agreements among council members.

In recognition of this success, NASCAR today officially presented 5.11 Tactical with the 2015 NASCAR Driving Business Award at the NFFB Council meeting in Las Vegas. The annual award is bestowed to the Official NASCAR Partner that demonstrates extraordinary leadership and results through its participation in the NFFB Council.

“Our sport is steeped in history and tradition, which is why it’s so impressive to see one of our newest council members capture the award through a bold commitment to engage our partners,” said Steve Phelps, Executive Vice President and Chief Marketing Officer, NASCAR. “5.11 Tactical embraced its role as a member of the Fuel For Business Council and delivered tangible business-to-business results that are worthy of this honor.”

Already in its 11th year, the NFFB Council is a business-to-business platform that brings together an exclusive group of more than 50 Official NASCAR Partners to buy and sell products and services. Since its inception in 2004, the quarterly meetings have facilitated more than 1,000 “speed meeting” sessions where Official NASCAR Partners meet and do business with one another, resulting in hundreds of millions of dollars in annual revenue and savings to its participating members.

The NFFB Council offers the unique opportunity for many FORTUNE 500 companies to bypass the time and layers of corporate coordination that may exist and construct customized deals to help address specific business needs. Through the NFFB Council, 5.11 Tactical has brought key personnel from across its organization to meet counterparts at other NFFB companies during these speed meetings.

“When we entered into our partnership with NASCAR last year, we expected to benefit from the sport’s massive reach and brand loyal fan base. We also fully intended to leverage the B2B opportunities provided by the NFFB Council,” said Bob Neapole, 5.11 Tactical Chief Revenue Officer. “We were pleasantly surprised by how quickly these partnership opportunities took shape thanks to NASCAR’s great business platform.”

5.11 Tactical has been an Official Partner and NFFB Council member since late 2013, and currently conducts business with a number of properties within NASCAR and multiple companies in the council.

About 5.11 Tactical
With offices globally, 5.11 Tactical collaborates directly with end users/operators to create purpose-built apparel and gear designed specifically to enhance the safety, accuracy, speed and performance of first responders worldwide. 5.11 Tactical products exceed rigorous and exacting standards, which have allowed the brand to establish a reputation for innovation and authenticity, and cement itself as the premier choice for Purpose-Driven professionals and enthusiasts worldwide. Learn more about 5.11’s best-selling tactical gear and accessories at www.511tactical.com. Connect with 5.11 Tactical on Facebook, #511tactical, Twitter @511Tactical and on Instagram @511Tactical.

Sign Up For Updates From 5.11 Tactical
Continue Shopping
Need Help?

Free Ground US Shipping On All Orders $35 Or More